Starting in TSR published a series of dravon Accessories’ that ran the gamut from character sheets and Dungeon Master screens to collections of spells and magic items. Today we’ve got the first of these, AC1: Adventurers in their natural habitat As the cover advertises, this is primarily a collection of pregenerated characters for use in your campaign.

Each character is presented with a name, stat block including attribute scores, alignment, level, saving throws, and hit points, height and weight, armor and weapons, spells known if applicableand a short biography. There’s also a lineup for each character class drawn by Jim Holloway.

Of note, the dwarf lineup includes two dwarf women, both of whom have short beards. Handwritten notes courtesy of the previous owner Characters range in level from 1 to 14, which onn the limit of what the rules supported at this point. 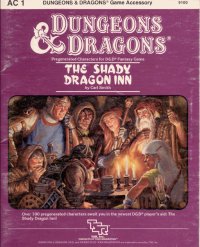 Each one only gets a paragraph of description, but that generally includes a couple of interesting personality af1 or bits of history to make them stand out. For instance the dwarf Leo Leopard-Bait “hates wealthy men” and “kicks cats when he gets the chance. The Shady Dragon Inn itself is also presented as a foldout map sized for use with miniatures.

Handy if you plan to use the inn as a base of operations for the PCs, especially if the odd tavern brawl breaks out on occasion. A short description gives a rundown of the owner and employees all drawn from the pregensprices, and the general state of the inn.

Again, it’s fairly terse but enough to serve as a base to build on. Finally, there are a few more characters presented here that I haven’t mentioned yet, under the heading ‘Special Characters.

As far as the development of Mystara, nothing here really contributes to the setting. Some of the characters do show up as pregens in future adventure modules; I know that X6: Apart from that none of them enter into the ongoing setting that I know of. That’s as close as it comes to being made canon in the setting. Coming up with NPCs on the fly, especially good names for NPCs, has always given trouble so a list of ready made characters to fall back on would have been useful.

There are quite a few in here that I’d love to use in a game some time in the future. No Comments Dec 30, No Comments Nov 29, No Comments Oct 4, About The Author Thalen. Leave a Reply Cancel reply.